Bollywood Actresses & Actors – Heroes & Heroine of Bollywood. At Present one of the most popular and Commercial Successful Film Industry is Bollywood. There are a huge number of Bollywood Celebrity, including Actresses, Actors, Singers, Directors & Producers worked with this industry. It is one of the best and largest entertainment Industry in India. Not only India it is also favorite entertainment Point for many countries people. The Bollywood Industry Every Year Released many Big-Budget and Sequel Films. In Around the World Bollywood is the second biggest entertainment industry after Hollywood.

The people is looking for their favorite Heroes and Heroines Biography & Personal Details on various online platforms. Here we trying to provide All Bollywood Celebrity including Highest-paid, Popular and New persons details. Actually we collect data from various reliable source like Wikipedia, Google, IMDB, YouTube & More. 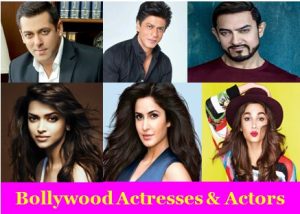 Salman Khan born on December 27, 1965 in India. He is son of writer Salim Khan & actress Suchila Charak khan. This Bollywood Hero is starting carer by doing a supporting role in the movie Biwi Ho To Aisi. Salman Khan established himself as one of the popular and commercial successful Highest-paid Actor of Bollywood.

Akshay Kumar, born September 9, 1967, is an actor. He studied Marital arts in Hong Kong and select acting career by professon. He is one of the famous and highest-paid actor in Bollywood Industry. Akshay Kumar is appeared with Big-Budget film 2.0 with actor Rajinikanth, Amy jackson. He also a successful model.

Deepika Padukone, born 5 January 1986 in Copenhagen, Denmark, is an Indian model & Actress. She is the daughter of former badminton Champion Prakash Padukone. Her mother tongue is Konkani. Deepika has a younger sister named Anisha. She established herself as one of the highest-paid and popular actress in Bollywood.

Kareena Kapoor born on September 21, 1980 in Bombay, Maharashtra, India. She is the daughter of actors Randhir Kapoor and Babita, and the younger sister of actress Karisma Kapoor. Noted for playing a variety of characters in a range of film genres—from romantic comedies to crime dramas—Kapoor is the recipient of several awards, including six Filmfare Awards, and is one of Bollywood’s most popular and highest-paid actresses.

Katrina Kaif born on July 16, 1983 in Hong Kong. She is an English Actress and model who appears in Bollywood Film Industry and few Telugu & Malayalam Movie. Katrina Kaif is one of eight siblings, 7 girls and 1 boy, from a mother who is a Caucasian of British Nationality, and a father who was formerly from Kashmir, India, but who has since acquired British citizenship.

Mohammed Aamir Hussain Khan born on 14 March 1965 (Age 52) in Mumbai, Maharashtra, India. He Referred as Mr. Perfectionist, King of the Khans, King of Bollywood. He is the recipient of numerous awards, including four National Film Awards and nine Filmfare Awards, as well as an Academy Award nomination. He was honoured by the Government of India with the Padma Shri in 2003 and the Padma Bhushan in 2010.

Ajay Devgn born on 2 April 1969 (age 48) New Delhi, India. is an Indian film actor, director, and producer. He made his film debut with Phool Aur Kaante in 1991 and received a Filmfare Award for Best Male Debut for his performance in the film. Devgan has won numerous accolades, including two National Film Awards and four Filmfare Awards. In 2016, he was honoured by the Government of India with the Padma Shri, the fourth highest civilian honour of the country.

Anushka Sharma was born on 1 May 1988 in Ayodhya, Uttar Pradesh. Her father, Colonel Ajay Kumar Sharma, is an army officer, and her mother, Ashima Sharma, is a homemaker. She began her acting career with film Rab Ne Bana Di Jodi and her notable films including PK, Jab Tak Hai Jaan, Sultan, Ae Dil Hai Mushkil etc.

Priyanka Chopra was born 18 July, 1982 in Jamshedpur, India, to the family of Capt. Dr. Ashok Chopra and Dr. Madhu Chopra, both Indian Army physicians. Chopra has received numerous awards, including a National Film Award and five Filmfare Awards. In 2016, the Government of India honoured her with the Padma Shri, the fourth highest civilian award, and Time magazine named her one of the 100 most influential people in the world.

Sonam Kapoor was born on 9 June 1985 (Age 32) in Mumbai, Maharashtra, India. She born to Kapoor family to Father Anil Kapoor (Bollywood Actor) and Mother Sunita Kapoor. She has a sister, Rhea Kapoor and brother, Harshvardhan Kapoor. Kapoor is one of the highest-paid actresses in the industry and is the recipient of several awards, including a Filmfare and a National Film Award.

Sonakshi Sinha was born on 2 June 1987 in Patna, Bihar, India. She studied from SNDT Women’s University to complete graduation in Fashion Designing. Sonakshi Sinha Father Shatrughan Sinha and Mother Poonam Sinha. She has two sisters Luv SInha and Kush Sinha. She started her career as a model and walked the ramp in the Lakme Fashion week in 2008. She got her break in movies after being signed up by Salman Khan for his thriller Dabangg. She received many awards and nominations for her acting performance.

Alia Bhatt was born on 15 March 1993 (Age 24 Years) in Mumbai, Maharashtra, India. Alia is the daughter of Mahesh Bhatt (director, producer, and screenwriter) and Soni Razdan,(film actress and director). She has one sister Shaheen Bhatt, a half sister Pooja Bhatt, and a half brother Rahul Bhatt. She began acting career in 1999 as a child actor in Film Sangharsh and her lead role Hindi Blockbuster film Student of the Year (2012).

Venkata Satyanarayana Prabhas Raju Uppalapati known as Prabhas was born on 23 October 1979 (Age 38) in Madras, Tamil Nadu, India. Mainly works in Telugu, Tamil Movies and also appeared in Bollywood Movies. He established himself as one of the popular and highest-paid actor in South Indian Media Industry. He is best known for the epic film Baahubali: The Beginning (2015) and Baahubali 2: The Conclusion (2017), which became the first ever Indian film to gross over ₹1000 crore (US$155 million) in all languages in just ten days, and it is the second highest-grossing Indian film to date.

Anushka Shetty was born on 7 November 1981 (Age 35) in Puttur, Mangalore, Karnataka, India. She is an Indian Actress & Model, predominantly works in Telugu, Tamil and Hindi Movies. Anushka Shetty is one of the highest-paid and commercial successful actresses in South Indian Film Industry. She is best known for S.S Rajmouli’s epic film Baahubali film series (Baahubali: The Beginning & Baahubali 2: The Conclusion), was the highest grossing Indian Film of all time with earned 1900 Crore in worldwide.

Varun Dhawan was born 24 April 1987 in Mumbai, Maharashtra, India. He is an Indian Film Actor who appears in Bollywood Films. He began his career with romantic comedy Student of the year, for which he received filmfare awards. Varun Dhawan is best known for films Humpty Sharma Ki Dulhania, ABCD 2, Badlapur, Dilwale, Badrinath Ki Dulhania and Judwaa 2.

I Hope you get meaningful information about Bollywood Actresses & Actors – Heroes & Heroine of Bollywood. we always posted India’s All Celebrity Biography, Personal life, marriage life and measurements details on our website www.bollysuperstar.com. Keep visiting on our website and bookmark this site on your brower for fast getting celebrity information.